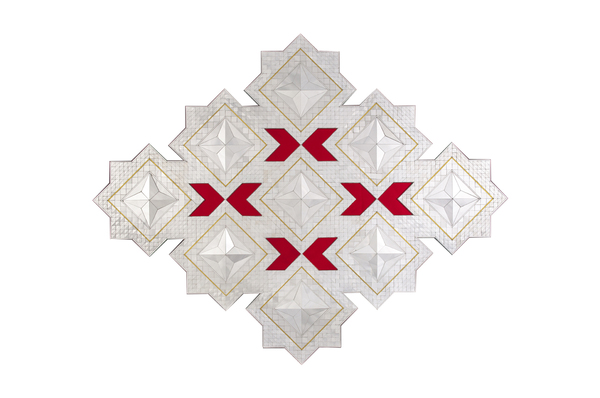 About Artwork in the mirror1

× Mehrnoush Alimadadi × Taraneh Khodaei is a young artist who is associated with visual arts through a background of understanding and knowledge on architecture × In her new collection, she has used mirror as the main element to present a different interpretation of the “self” × Although many artists have already used mirror as the main element of their artistic creation, the type of perception and presentation of what the personal concern of the artist is, can help us understand what she has imagined and put on display for her viewers × Mirror has always been of special significance and role in Iranian culture and tradition × Any important change in the life of Iranian people has been somehow associated with something like mirror indeed × This can be a lucid turning point in their lives × Truly, how far has the mirror been able to give a bright reflection of the life and whatever embodied in its nature? In selecting this material, the artist has delved into the meaning essence of the mirror by processing purport of her “self” and associating with it her concerns, fears and hopes × Cut pieces of mirror in her works are seeking what is known as truth like her true nature of “self” × Part of the “being” can be observed in mirror pieces and in some parts one can see a spiritual journey deep into the nature of the being × Female dress forms adorned with mirror cut pieces depict a unique instance of honesty × This known object with its bright dressing has turned into a symbolic identity and the mirror knots consciously created and put together by the artist give elegance to the adornment of the dress form like colorful flowers × Now, the subject is not a matter of dispute anymore, rather, it is to convey a message beyond gender distinctions × The firm posture of female dress form before the patinate mirror is the manifestation of a presence that perhaps can be interpreted as what the rationalist philosopher Descartes said “I think, therefore I am.” × Although the rust and antique mirror has lost reflection for vanishing silver-mercury, strong female presence intends to picture a vast horizon for itself free from cliché judgments × Unlike manly unitarianism, femininity runs away from “being” and embarks on translating forms of “be” into action × Femininity represents pluralism × Juxtaposition of femininity and mirror can well create such a friendly association × Iranian-Islamic architecture has its roots in belief in the “self” and the important mystical-philosophical discussions of “unity of being” × Such an approach is inspired by the philosophy of man’s attitude toward the universe × This way, the artist architect sees his /her “inner being” the seat of Godly Nature and observes the environs, including the atmosphere behind architectural creation × In this sense, there is no place for contradiction, and consequently there would be no boundaries, no direction × All is association and endlessness × In other words, everything is “horizontal” × “Horizontalism” is an advocating principle the application of which in Islamic architecture adds to the meaning foundation of this art and distinguishes it from descriptive form × Undoubtedly, this approach has not only been deeply rooted in the creation of the work of art but also it has found a chance to reflect the artist’s type of approach and style of her thought × Femininity is indeed the promoter of horizontalism as well as the way of living happily × This nature and disposition of femininity comes together with living in another way × Such an approach, owed to the artist’s precision in designing and arrangement of mirror pieces according to Islamic-Iranian architectural principles, clearly coordinates the phenomenon among “form”, “concept”, and “structure” × The procedure, in this way, is undoubtedly undeniable × The explicit and implicit qualities of Taraneh Khodaei’s works motivate the viewer to inspect her works of art from various angles and pass moments in contemplation before her works; the moments, or in another word, the same traces that have found a chance to show up and have the viewer glued to the work

View Me on the mirror

View me in the mirror (woman …

View me in the mirror4