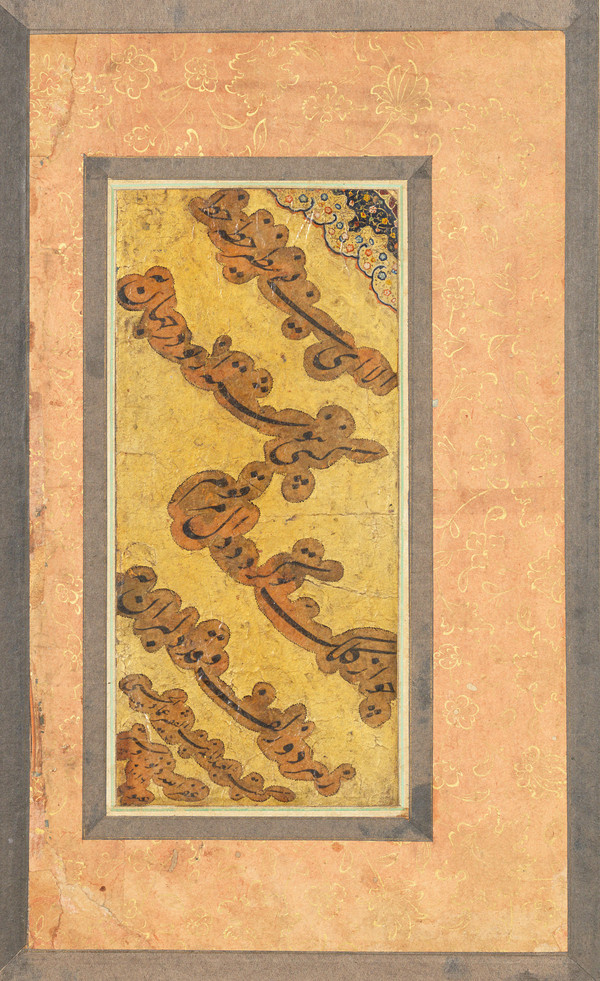 Persian verses in nasta'liq script in praise of the scribe, signed by the Safavid calligrapher Mir 'Imad al-Hasani (d. 1615) Persia, dated AH 1016/AD 1607-08 Persian manuscript on paper laid down on card, four lines written in nasta'liq script in black ink within brown cloudbands against a dull gold ground, the upper right corner with a panel of illumination in colours and gold, outer border with floral motifs in gold on a salmon-pink ground, some staining and soiling, in mount 265 x 160 mm. Footnotes Provenance: The Property of a Lady. Mir 'Imad al-Hasani is one of the most celebrated nasta'liq calligraphers of the Safavid period, whose hand has since been a model for nasta'liq scribes. He was born in Qazvin, spent some time in Tabriz, travelled to the Ottoman lands as far as the Hejaz, visited Baghdad, Damascus and Aleppo, and on his return settled in Isfahan, where he entered the court of Shah 'Abbas I. It is recorded that his fame and the Shah's particular fondness for him caused jealousy among other calligraphers and resulted in the rumour that he was a Sunni, and as a result his murder by the order of the Shah in 1615. See Mehdi Bayani, ahval va asar-e khosh-nevisan, vol. II, Teheran, 1346 sh., pp. 518-38. Karimzadeh, in his book on Mir 'Imad, questions this account and concludes that the widespread rumour of him being murdered by the order of the Shah was a piece of propaganda by the Ottomans against the Shi'a rulers of Persia. (Mohammad Ali Karimzadeh Tabrizi, The Life and Art of Mir 'Imad al-Hasani, London 2001).

If you have information on the effect you let us know