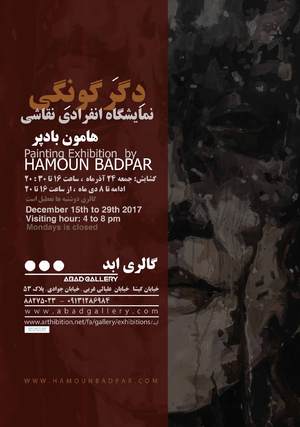 View Exhibition
Alteration
Alteration is a perpetual changing process, perpetual and permanent while it exists.
Human, facing themselves is always changing through an unchanging principle. And there is always something or a moment being observed here in between; a witness to relate the change, which is neither positive nor negative, as going from one place to another while there is no specific beginning or an end. He lives in the past and the future and he is lost in the present time. He relates the whole himself continually grasping whatsoever in access.
The contemporary human is attached to their mementoes, without a perception of what has happened to them.
The present collection is a perception or an interpretation of the aforementioned words, which is done in the dimensions of name and portrait.
More people through many years facing the artistic mind, in a way and perhaps unintentionally, have left us their works as the language of expression and transformation. The present art works, represent their artistic mind. 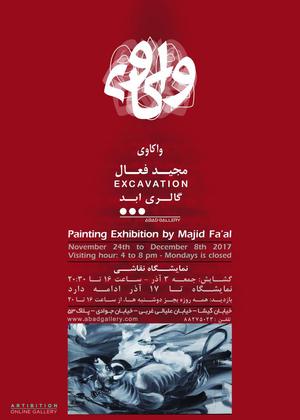 View Exhibition
These falling and rising heads, silence and thunder from the turbulent soul in the body, the dispersed darkness and the invasion of the mysterious shadows; all is a way to reach the light. The light in these images is a visual observation. The purpose of this statement was to seek to achieve a kind of self-consciousness. The initial motion of the search begins with the artist's face in front of the camera. The first pictures obtained are faces are identifiable. But along the way and with the act of destroying the face, the process of formation of works goes toward the other. The mania of Soul and Madness the result of wandering in this way is depicting a terrible imagination and what has been created is abstract forms. Human Elements they are destroyed by the repeating rotation around the cavity of the light and then away from it. This is in the wake of the circuit, and also the image of the image to elements and the process of nature similar to that. Inevitably, in this addition and reduction, the area appears like hard rock and flames that slide. In this way, the purification of the necessity of knowledge acquires an inner concern to a wide range of understanding of the world around us. Toorang Soleymani is a new-finder artist from the city of Amol. This city has long been the base for gathering the scholars of history and philosophy, and every moment the presence of literary circles and the attention to the mystical concepts of the way of thinking to the people of art and literature in this geography has brought. Hence, in the face of these effects, it should borrow from the atmosphere of the ecosystem and richer the image language in the achievements future of the artist … 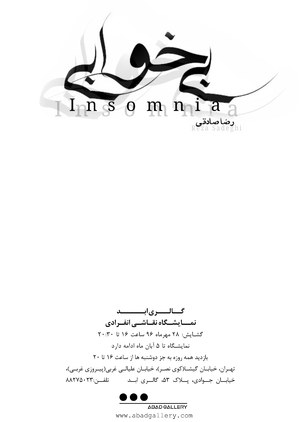 View Exhibition
The world is my imagination (Arthur Schopenhauer)
Since a ruffed and an unintelligent will is rooted in the essence of man's being, life is often filled with suffering. It's all because this will is always remained unsatisfied. The pleasures of life are not good in their own senses of being, because occasionally comes the arrival of the moments which are not claimed by dissatisfaction. But, these content moments will face an end rather too quickly, and replaces with the same old suffering and fatigue that will attend us to death. Moreover, the man itself will enhance these feelings. Routine and repetition in fact are so intertwined with man's life that one could say they eventually become a part of him and in their absence, life loses its definition.
Here, it is attempted to look over at the routine and dissatisfaction of one's life in a different point of view, no matter in what circumstances. 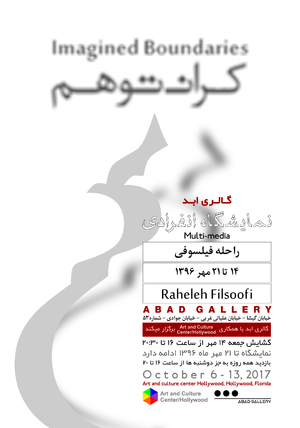 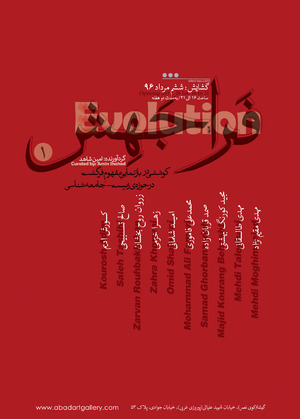 View Exhibition
Ultra-mutation
Evolution is not an option, but rather a non-heterogeneous event that leads to biological mutation and social upheavals. A disorder that might result in a transition or a devastating disassociation. Evolution, in its common definition, is a (genetics) mutation, resulting in displacement of generations, and biological and physiological evolution. Such transformations, which create changes in the structure and behaviors’ characteristics, would consequently alter the social infrastructures in different areas.
Because the general concept of universe is not outside the human perspective or the human environment, referring such concept to the subjective and/or objective aspects would only be acceptable through the artists’ point of view. Still, imagining and exhibiting such event seems to be fruitless and complicated, rather than impossible. For, this concept is far greater than it actually looks. In the process of creating the final production and the resulted phenomena, the event or happening seems to be more practical regarding such event at the back of the mind, which in turn, includes all individual and social events and approaches of the past, present and future.
Practicing such definition in a visual language that could be displayed in public would of course be a hardship, but is not impossible. The final product, might be an evolution by itself, or in other words, influential for the evolution.
Amin Shahed
Summer 96 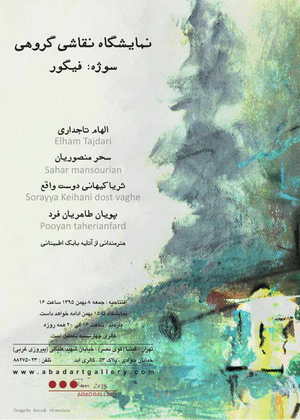 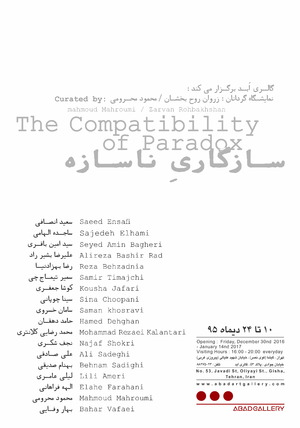 The Compatibility of Paradox

View Exhibition
Our world today is overwhelmed with a compatible paradox.
It is impossible, and the impossibility seems to be crystal
clear. Still, accepting such parody is a delusion, while not
accepting it does not seem to be reasonable either. For it is
the situationthat naturalizes such compatibility. Nowadays,
our life is full ofcompatibility of paradox. We could go on
aboutsuch contradictorystatement, yet the story seems to be
finished before it actually begins. It is because thecompatibility
within the paradoxical directions and orientationsis not possible.
What you are about to confront, is our circumstantialexpression
of paradox; observedin individual and/or social thoughts and
experiences that are not necessarily essential to state.
However, what is essential to iscuss in this mess?
Is it the meaning?
Is it thought or the paradox resulting from the thought? 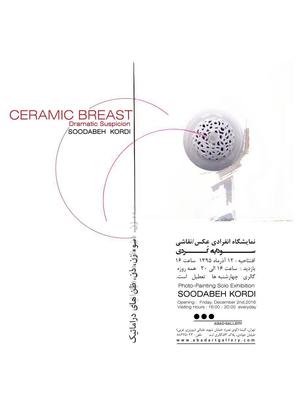 View Exhibition
Dramatic misunderstanding (misconception)
Constructing a vision by dramatic sprit and spectacular language, like a writing style in a different executive space, are the fundamental brain storming of this collection .This collection has been created by the Photo-Painting style. The ceramics and curved lines in these arts have inspired from the perception transportation. The picture are penumbra, however exhibit the material and fracture in a clear way. By these arts, the color and pictures are shown purity or purely. They have been seated by the self-perception, and the dark and white snaps play their rolls in an abstraction way. These arts have inspired from the universal ceramics to state the dramatic spirit of human. Symmetry and repetition of these arts donated a kind of woman spirit which is more clear by this femininity. Ceramics are the most femininity fracturity in handicrafts which its creation is possible in every way at visual arts. And it would not decrease the delicacy of femininity. This collection resembeled to all creations which have been created by their creator who make the dramatic arts that their believe it’s the first stage of creating an art….

View Exhibition
Art has no clear-cut borders and the definitions given for art are not consistent with one another, and therefore it is liable for debate. In this situation, could we consider ‘handicrafts’ as a branch of art, with an aesthetic position? Since handicrafts possess a comprehensive and dynamic nature, could they be regarded as ‘art’, per se? We might even embark on the assumption that handicrafts are neither art nor craft or industry, but resting on the borderline of the two, due to their functional property, and thus establishing a bilateral interaction between art and craft. There is a strange paradox in the essence of handicrafts. On one hand, emphasis is laid upon the necessity that an object crafted by hand should be something that can be used in daily life, and hence this utilitarian aspect leads it toward technicality and enjoyment of industrial characteristic. On the other hand, underscoring the fact that there should be a mere aesthetic aspect for crafts and they are to be conceptual actually transforms them into an art. Negative attitude and judgment about handicrafts, so to give them an inferior position compared to art, are to a great extent related to their utilitarian aspect and application in daily life of mankind in a certain era of history. Sabrina Gschwandtner mentioned the fact that the strongest point of craft is simultaneously its weakest point, and it can be utilitarian in a way that a painting can never be. Though it seems that the nature of crafts has transformed and experienced changes after the industrial revolution, the artists and art critics still consider an inferior state for them, out of the domain of art. This treatment is only because …