Shalman art gallery was established in the autumn of 2011 with the idea to support young Iranian talents in the fields of visual arts and introducing them to the art society with the principle of supporting art and Iranian artists. Believing in the outstanding power of imagination and creative potenmore...

Price Range: Between to Toman 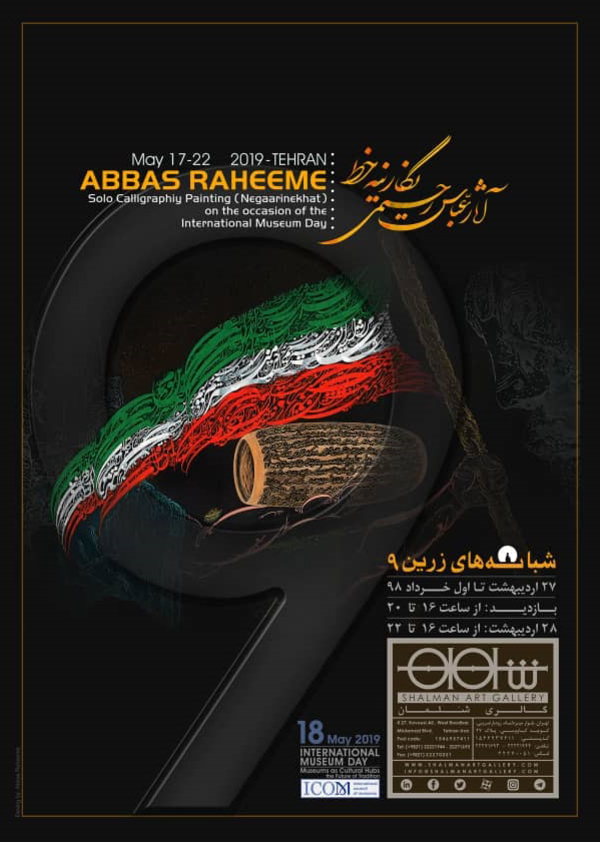 The method and style of “NegaarinehKhat” (Calligraphy Painting) emphasizing upon the presentation of the originality and the correctness of the Iranian script and inspired by the Iranian painting tradition, prepares a Visual connection touched by the sense of beauty for all human beings irrespective of the varying nationality race, age, language and religion. This connection is directed in the first sight to the variety of colors with an emphasis upon the harmony between the colors and the beauty of the composition, taking the onlooker onto another field of arts namely calligraphy.
The harmony and respective appropriateness of the shape and looks of the letters with the colors would speak of a soundless communication with the onlooker, showing the originality of the beauty and magic works of the Iranian script, especially with the font of “broken Nastaaliq”, making a more exact visual contact possible, a contact which takes the onlooker to the highest horizon of the original Iranian arts, with magic circles and drawings as well as varied connection which are unique to this especially wonderful calligraphy font.
“Reaching” this point of contact in both the asset of the artist in creation of his work and the horizon of the hidden eyes of the viewers. ”Reaching” in the most beautiful word in the human history, whether an earthly reaching to the beloved denting or a heavenly experience of connecting with the spirituality, both of which are holy, as the earthly mixing with a loved one in the preparing grounds for a universal and heavenly love and unity.
In throoding this pathway, with a deeper look at works, the viewer in taken to the world of spirituality, where the meanings and values of humanity a selection of the Persian literary sayings which have their roots in the rich, original and noble Iranian culture.
This is a world full of mysteries and secrets in which the mysticism of Rumi, Khayyam and Hatif as well as the epic poetry of Ferdowsi and Nizami and the ethical and socially high values prescribed in lucid statements of Saadi and Parvin. Then we note that Hafez of Shiraz teaches the humanity the right path of life and the high manners of loving the universe and the servitude to god. Also many other Iranian poets and geniuses whose poems and sayings direct the mankind to the right path of life with their objective being the noble idea to direct the people to wards humanity blossoming, creativity and fruitful life in pathway of eternal salvation.
It is at this final point that a true artist reaches his final destination, the connection between the addressed and work of arts created with harmony via color and script and I, leading to the world of spirit. This is a destination but it is far away from being the end …..It is itself the start of an endless journey.
I thank god who is himself beautiful and likes the beauty that enabled me to present these beauties with my hands.

My city is nearby

Figures in the shadow

I am a woman